Blog
>
The Failed Coup Robbed Us of Georgia Joy

The Failed Coup Robbed Us of Georgia Joy 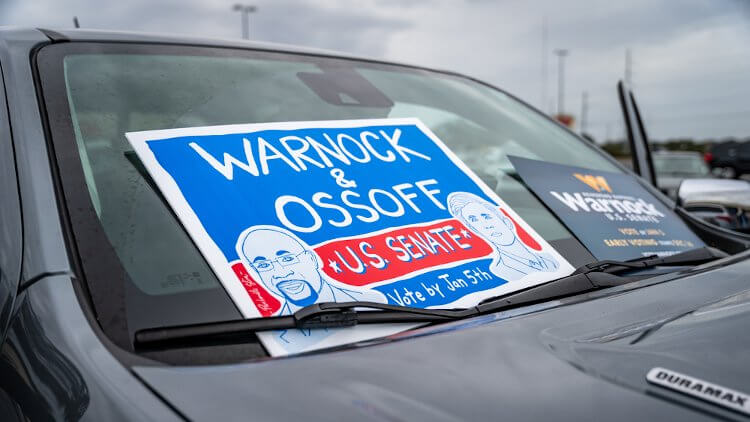 This op-ed was originally published by The Advocate.

Monday, January 4, began my first official week as the new executive director of Equality Federation. I was ready to hit the ground running by playing a very small part in the massive and successful Georgia Senate get-out-the-vote effort. I spent my first two days volunteering with our member group Georgia Equality to contact pro-LGBTQ equality voters and was pleased to help a handful of people find their polling place.

On Wednesday, I, like many other LGBTQ+ Americans, was elated to learn that the organizing efforts of Black-led and allied groups in Georgia had paid off and for the first time in history we would have a fighting chance to get pro-equality legislation through the Senate.

The wins in Georgia gave me hope.

So it was particularly disheartening that on the same day the Senate moved closer to a pro-equality majority, we saw the president put this most sacred democratic institution at risk by inciting his violent, white supremacist supporters to riot at the Capitol in a fascist coup attempt.

Many queer Americans like me have a complicated relationship with our government, which even in my lifetime outlawed our relationships, refused to address the HIV epidemic, and still expressly allows for discrimination against us. But in our most optimistic moments, we imagine a democracy that will protect the freedom and rights of LGBTQ+ Americans. This is why we organize, vote, and lobby for better policy.

So even as I watched the chaos unfold in Washington, D.C., I couldn’t help but think about how small the numbers of rioters were compared to the number of voters who had turned out in Georgia. More than 4.4 million people — 60 percent of eligible voters — exercised their right to vote and in doing so, proved the importance of organizing not just during election season, but year-round. They demonstrated that even in a pandemic, at a time where we’ve become so isolated from one another, nothing can stop the power of people talking to one another about what truly matters: hope.

The Senate wins in Georgia didn’t just happen. These victories are thanks to groups like Stacey Abrams’ Fair Fight and a coalition of progressive organizations that came together to empower and educate voters about what was at stake in this election. Georgia Equality joined this movement to let LGBTQ+ folks know this election impacted all of us.

For the past two years, we’ve worked with this team to create a long-term voter engagement program that allowed them to ramp up for this incredible runoff race. In just two months, they raised almost $1 million, which allowed their staff and volunteers to call more than 25,000 people, mobilize more than 6,600 voters, and send more than half a million texts.

I am optimistic about the protections we may now see at the federal level thanks to the incoming pro-equality administration and Democratic majorities in the House and Senate. But for LGBTQ+ people who face varying social climates and legal policies depending on where we live the fight is far from over. Despite this historic Senate victory, we have much work to do in the states. In Alabama, Montana, and North Dakota, lawmakers have introduced bills that seek to harm LGBTQ+ youth, and we are only weeks into state legislative sessions.

We must do what was done in Georgia in all of the communities we call home. We must believe in and invest in organizing to build people power. We must do this to protect the LGBTQ people who are still waiting for the most basic protections, to break the hold of violent, racist policing, to end the HIV epidemic, and to build the world we envision. We must, and together, we can.