Blog
>
We're Not Letting Trump Distract Us From State Battles

We're Not Letting Trump Distract Us From State Battles 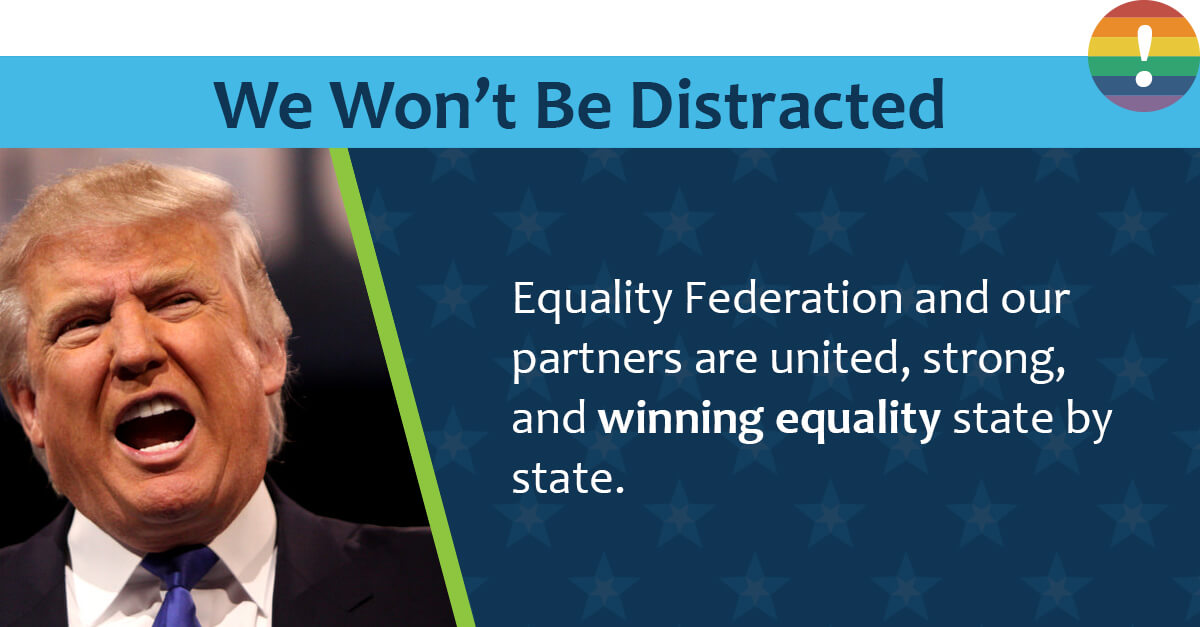 In case you missed it, 2016 was a year for the record books. Well over 200 pieces of anti-LGBTQ legislation kept Equality Federation and our state partners busy in state capitals across the country. That’s the bad news.

The good news? We had a kill rate of over ninety-five percent, meaning we defeated all but 4 of these bad bills.

So what about this year? It’s still too early to tell exactly how many anti-LGBTQ bills we’ll see this session (Louisiana’s legislative session, for instance, doesn’t start until April 10). What we do know is that as of today, 75 bills hostile to LGBTQ equality have already been introduced in 25 states.

While 75 bad bills is still an awful lot of bills, this year is not shaping up to be 2016 all over again. On the other hand, what we are seeing is perhaps an increasingly sophisticated strategy on the part of our opponents.

While the negative bills we’re currently tracking through our Legislative Action Center are a familiar mix of religious exemptions, anti-transgender bills and preemption efforts, there are some new trends. Let’s take a look at them:

In 2015, Michigan passed a law allowing publicly funded adoption agencies to refuse to place children with same-sex parents based on religious objections. A similar bill is dangerously close to passing this year in South Dakota. Senate Bill 149 has already cleared the Senate and is on its way to the House.

Whether the governor will veto or sign it into law is unclear, but South Dakota is not alone. Both the Alabama Child Placing Agency Inclusion Act of 2017 and Oklahoma’s House Bill 1507 would, if passed, prohibit those states from refusing to license child placing services if they deny placements to individuals or couples that conflict with their religious beliefs.

An Escalating Assault on Trans People

We’re currently tracking 30 bills in 15 states that seek to restrict and take away the rights of transgender and gender nonconforming people. Of these, nearly half target transgender students in schools under the guise of “student physical privacy” but are really attempts to force them to use school facilities inconsistent with their gender identity. Most of the anti-transgender bills, in fact, focus on bathrooms, locker rooms and similar spaces, and are increasingly specific in their references to genitalia, chromosomes and birth certificates.

FADA is the New RFRA

In previous sessions, we saw a spate of discriminatory religious exemption attempts, or so-called Religious Freedom Restoration Acts (RFRA), introduced around the country – most infamously resulting in a veto in Arizona in 2014 and the debacle in Indiana in 2015 that is still being contested. In addition to religious exemptions, the opposition is also introducing so-called First Amendment Defense Acts (FADA). Last year, Georgia’s governor vetoed HB757, while HB1523 passed in Mississippi.

The latter has been blocked by a judge pending a circuit court hearing in April. A FADA goes beyond the traditional scope of a RFRA by establishing that a government cannot take action against someone based on their views of marriage stemming from their religious beliefs. This new framework is overly broad, ripe for abuse, and would open the door to numerous frivolous lawsuits against the state.

Rather than a RFRA, which gives an individual a defense in a dispute, a FADA opens the door for provocative, proactive action by opponents of freedom and fairness for all Americans. We’ve seen FADAs introduced again this year, including one that was defeated in Wyoming.

Another type of bill introduced this session that is both new and alarming is Tennessee’s SB127. As introduced, it prohibits state and local governments from taking “discriminatory action” against a business based on that business’s internal policies. Among other things, this would prevent state or local government agencies from hiring only contractors with inclusive nondiscrimination policies.

In other words, it would allow a business to discriminate against LGBTQ people without reprimand or repercussions.

Another emerging opposition strategy is to bring the issue of transgender bathroom access directly to the voters. In Washington State, for the second year in a row, there is a campaign underway to put this issue on the ballot, meaning voters could get to decide whether transgender people should be forced to use the wrong bathroom. A similar effort is underway in Massachusetts, which just last year passed public accommodations protections for transgender people.

This is a disturbing trend, especially given that Washington and Massachusetts are states that already have comprehensive protections based on gender identity. These ballot initiatives therefore seek to revoke certain aspects of current state law–namely restroom access–which is an unprecedented attack.

Currently, there are three states with nondiscrimination laws that cover sexual orientation but not gender identity. In Wisconsin, New Hampshire and New York, transgender and gender nonconforming people are not protected by state law. New York’s governor did recently issue an executive order extending protections based on gender identity and expression, but a gender identity bill in that state has yet to pass.

Take for example Equality New Mexico, which is advancing legislation making schools safer for LGBTQ youth and another bill making it easier for people to change their gender marker on their birth certificates. New Mexico is also one of 17 states and counting this session that have introduced bills banning conversion therapy for minors. Please stayed tuned for a blog post on conversion therapy next week  as part of Equality Federation’s efforts is to shine a spotlight on this important issue.

Working hand in hand with our state-based member organizations and national partners, we will not only continue to defeat hostile legislation, we’ll also keep winning with pro-equality bills that improve the lives of LGBTQ people everywhere. State and local efforts to secure nondiscrimination protections, advance transgender equality, and protect all students are now more important than ever.

As you’ll see in our Legislative Action Center, the fight for equality is happening coast to coast and everywhere in between. Whether you can call your legislators, volunteer, or donate, now is the time to get involved in the community you call home.