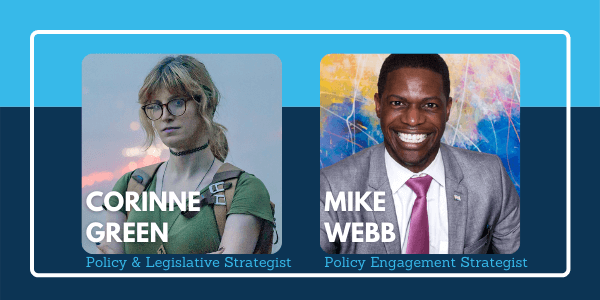 It’s an exciting time at Equality Federation. I am honored to announce two new staff members have started this week to enhance and expand our advocacy work. Corinne Green has joined as our Policy & Legislative Strategist, and Mike Webb has joined as our Policy Engagement Strategist. Learn a little below about Corinne & Mike, as well as the way our growing advocacy department will operate.

Our advocacy team has now grown to four individuals and better reflects the work happening across the country. And as anti-transgender attacks continue to remain our opposition’s focus, we are proud to say that our entire advocacy team identifies as transgender or non-binary. At Equality Federation, transgender people are not only at the table but are making the decisions and setting the agenda.

We’re excited to introduce you to a team that will work closely with our state partners, national partners, and other stakeholders to build an active base of LGBTQ supporters in every state to advance pro-LGBTQ policies and defeat anti-LGBTQ policies from the ground up.