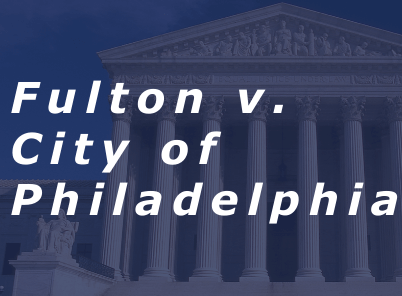 On November 4 the U.S. Supreme Court heard a case (Fulton v. City of Philadelphia) that will determine whether taxpayer-funded child welfare services agencies have a right to discriminate against LGBTQ people.

Background from Family Equality
In May 2018, Catholic Social Services (“CSS”), a faith-based foster care agency filed a lawsuit against the City of Philadelphia with whom it had a contract to provide public child welfare services. Despite the nondiscrimination provision in the City’s contract with CSS (and all other contractors), CSS refused to license same-sex couples to be foster parents based on religious objections.

When the City told CSS that it had to comply with the nondiscrimination requirement or its contract would not be renewed, CSS sued the City, claiming that requiring CSS to abide by the generally applicable nondiscrimination requirement for contractors violated the free exercise of religion, even though CSS chooses to be a contractor and accept taxpayer funds to provide the public service of child welfare. The federal trial court and the federal appeals court rejected CSS’s argument and ruled for the City, finding that CSS’s religious Free Exercise rights were not violated. CSS appealed to the United States Supreme Court, and in February 2020, the Court agreed to take the case.

The questions before the Court (as written by CSS) are: