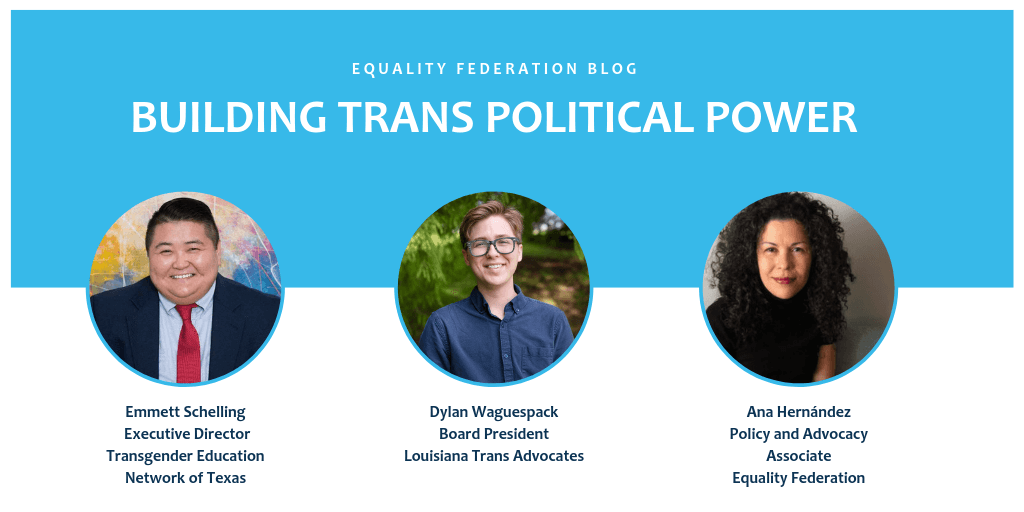 Our Legislative Action Center curated a conversation about building trans political power with experts Emmett Schelling, Executive Director at Transgender Education Network of Texas, and Dylan Waguespack, president of the board of directors for Louisiana Trans Advocates. Check out some of the highlights from our conversation.

Ana: Last legislative session, Equality Federation identified about 100 trans-specific bills in state houses across the country, of the constellation of the almost 800 total bills that we were watching. Of those 100 bills,17 passed and one in Tennessee has been deferred until the next session.

Trans advocates are extraordinary, and I think some of the evidence to that is the fact that one bad bill in Iowa had to be passed through the budget process at the very last hour and pretty much under the cover of night. It says enormous things about presence and power.

But by far, most of the bills that passed this last legislative session are positive like GENDA in New York; new laws in Colorado, Hawaii, New Hampshire, and New Mexico to permit nonbinary gender markers on birth certificates or a driver’s license, and also streamline the process. Also, some unique ones, like a law in Illinois that provides access to state financial aid for higher ed for transgender students and an equal pay act in Colorado that prohibits sex-based discrimination for equal work, where sex explicitly means gender identity.

The shadow side of success is that it comes with terrible attacks and enormous loss. We know that in 2019, 17 trans people have been murdered of whom 16 were women of color. Emmett will reference three of the murders in Texas – Muhlaysia Booker, Chynal Lindsey, and Tracy Single.

Dylan: For Louisiana Trans Advocates building trans political power means so many things, but the critical part of it is ensuring there is not a day of our Louisiana legislative session when a trans person is not present at the state capitol ready to advocate. I don’t think this is something we can say about every state house in the country — that there are trans people present every day. We try to ensure there are trans people present on behalf of our community and having these conversations and building relationships with lawmakers, fellow lobbyists, and the media in this space. I have been super lucky that I’ve been able to be one of those people there every day and getting to do this work. We’re trying to grow this program so it’s not just one person, but many people who are going to be there throughout the entire session.

Emmett: Dylan’s work is very similar to the work we’ve been doing in Texas. I realized there was not enough engagement from the full spectrum of the community. Oftentimes I think, unfortunately, what happens with any community is there becomes three or four very well known faces that represent that collective community. You’re talking over one million people, it’s a large community.

What the trans community has in common is that we’re trans and oftentimes that’s where it stops. Really broadening the ideas of who our community is was a big priority for me to make sure that different people were feeling empowered by this process instead of alienated and scared to engage.

In Texas, towards the end of our session this year we got news that Muhlaysia Booker had been murdered. We sprung to action and collaborated with Black Trans Women Incorporated and the Black Trans Advocacy Coalition.

Of trans folks murdered this year nationwide, all but one were black trans women. We recognized this was an opportunity to ensure we could get some face-to-face meetings between legislators and the leaders of those groups. Black Trans Women Incorporated and the Black Trans Advocacy Coalition printed a picture of Muhlaysia and put it in front of every legislator.

They said every single lawmaker had a hard time looking at the photo and many of them turned it over. This was the first time legislators were faced with the reality of what was happening in a deeper way. As a result of the advocacy and those visits, we were able to hear for the first time ever on the Texas senate floor that “black trans lives matter” and “trans rights are human rights.”

In the midst of tragedy we were able to really make legislators understand the cost of the rhetoric and what our community was paying. We made sure they knew these were people with families and loved ones who cared for them and did not deserve to be hurt or killed.

Ana: When you think of trans political power inside the movement for LGBTQ rights broadly, what would it take to build an equitable movement?

Dylan: There is a tendency when a trans person comes into the door of a mainstream LGBTQ advocacy organization one or two things might happen. The first is that person is relegated to only working on trans specific things. They might be bringing tons of skill sets, they might be a whiz at communications, a whiz at a grassroots lobbying efforts, or digital organizing.

But what they’re asked to do instead is to share their sad personal story as a storytelling tool. Stories are important. We should be doing storytelling work. I think we know that’s an effective strategy, but this is less about work that has to be done versus how that person is being funneled into very specific areas inside of these organizations.

This doesn’t happen everywhere. Emmett and I have both talked about how inside of our organizations we try to immediately do a whole person assessment.

I think this is a really important thing for all of our organizations to be thoughtful about. If not, the end result is that a trans person who got sidelined into one specific area knows they’ve been undervalued. When they leave, they’re not coming back.

They may not be coming back to legislative advocacy at all because of that experience. Now we have this highly skilled, high potential advocate who is not part of the movement anymore.

We know when trans people aren’t in front on these issues at the legislature we lose. It’s also bias-confirming to legislators and stakeholders who are in the room and aren’t seeing trans people because it makes them feel like we’re being hidden because something is wrong with us. It doesn’t help move the ball forward on these issues.

Emmett: There is a disconnect in understanding how many trans people also identify as LGB or Q. That intersection would actually empower them to be able to do really good work in other places. They don’t need to learn about the trans experience with somebody else to do work in communications, policy, or in whatever capacity they’re working.

They have a deep innate understanding of how they’re framing it, how they’re looking at it, what they’re looking for. It cuts down on the workload a little because I’ve heard people ask, “Can you talk to our communications person?” because they are really wanting to do it right.

It’s good that this is happening when it is somebody who does not live this every day, who is not trans. But it’s important that we’re also on the forefront of this work when it’s about us.

Our best value we bring to this movement is not to just bleed out for it. That is really important for us to understand. It also creates a healthier culture.

We have to stop pigeonholing trans folks in LGBTQ advocacy work to do only trans specific things when they have so much more to offer.

Ana: Putting all of this together in terms of building trans political power, working in coalition, and what you need from more mainstream LGBTQ advocacy organizations, what might the next legislative session look like for you?

Emmett: We’re going to take our best guesses, but we’re fully aware that there’s an election that’s going to happen in between now and when we start session. Politics are very hard to predict accurately.

Dylan: We’ve got statewide elections in October, including all of our legislative seats in Louisiana. This is the first year where we’re going to see the effects of the term limits that we passed almost 20 years ago. We’re about to see for the first time something like 20 new senate state senators out of 39 and 45 new house members out of 105.

Anything could happen. We have no way of predicting it. What we can do, and what we’ve been building toward, is getting very comfortable with some of the key players behind the scenes of Louisiana politics.

Emmett: In the previous 2017 legislative session in Texas, we argued about bathrooms for eight months. In 2019, we heard statements from Republican legislators that had signed onto horrendous bills in the past apologizing to trans people. It made us realize something is happening.

It’s pretty clear in its messages. On the back of it we ask people to sign a pledge that says, “as a proud Texan, I’m ashamed that my state fails to give equality to transgender people.” It’s going to help us continue outreach.

We can make all these policy goals, we can achieve them, but if we don’t fully engage communities to come along with us and buy in, all of this policy work won’t necessarily change things for our community.