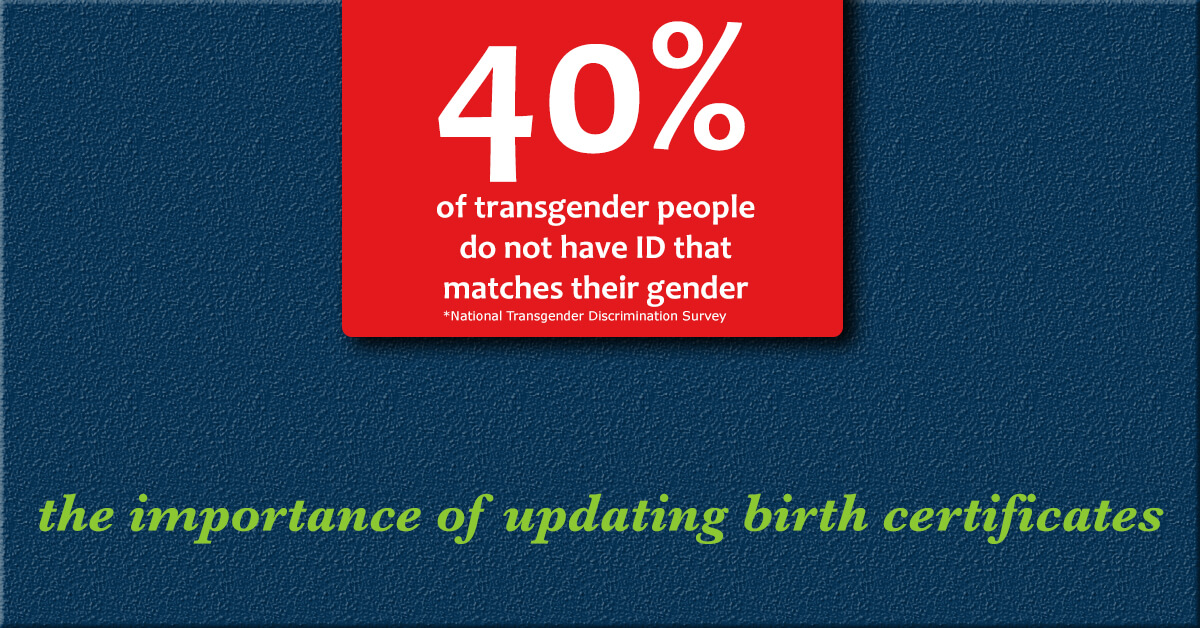 Now is the time for transgender equality, and more states are doing the right thing. They are no longer forcing transgender people to have surgery or obtain court orders in order to change the gender marker on their birth certificates.

These modernized policies address a serious issue: the 2011 National Transgender Discrimination Survey found that over forty percent of transgender people live without identification that matches their gender identity. This impacts a person’s ability to get a job, enroll in school, apply for housing, and so much more.

So far six states and the District of Columbia have modernized their birth certificate gender change policies. California, Maryland, New York, Oregon, Vermont, and Washington have all updated their policies to eliminate surgical requirements. Instead, individuals can submit a letter from a licensed medical or mental health providing stating that they had undergone clinically appropriate treatment.

In light of the current legislative climate, these modernized birth certificate policies are more crucial than ever. A wave of anti-transgender bills has flooded state legislatures across the country, attempting to limit transgender people’s access to bathrooms, locker rooms, athletic teams and school activities.

These bills base an individual’s gender on the sex listed on their birth certificate. In other words, if a transgender person’s birth certificate doesn’t match how they identify or what they look like, these bills would seek to deny them access to even the most basic public facilities.

Some states are pushing back though. Through our Legislative Action Center, we are currently tracking modernized birth certificate bills in two states: Colorado and Illinois. Like the other states that have updated their laws, these bills seek to remove a serious burden on transgender people by making it possible for them to correct their core identification document.

While we’re hopeful these bills will pass, the path to victory is not always easy. New Jersey, for example, passed such a law in 2013 only to have it vetoed by Governor Chris Christie.

While these modernized policies are the current gold standard, some states are considering further necessary improvements. There are efforts underway to broaden the list of medical professionals allowed to submit letters to include physician assistants and licensed clinical social workers.

In at least one state, there is a bill that would allow an individual to submit a letter testifying to their transition on their own behalf. These changes do much more than simply correct a document; they also reduce a transgender person’s risk of being discriminated against, humiliated, harassed and even assaulted.

The Federation is proud to support our members’ work on this important issue, including One Colorado and Equality Illinois. By convening our members to share strategies, making connections with our national partners like the National Center for Transgender Equality, and sharing knowledge from successful campaigns in other states, together we will win!