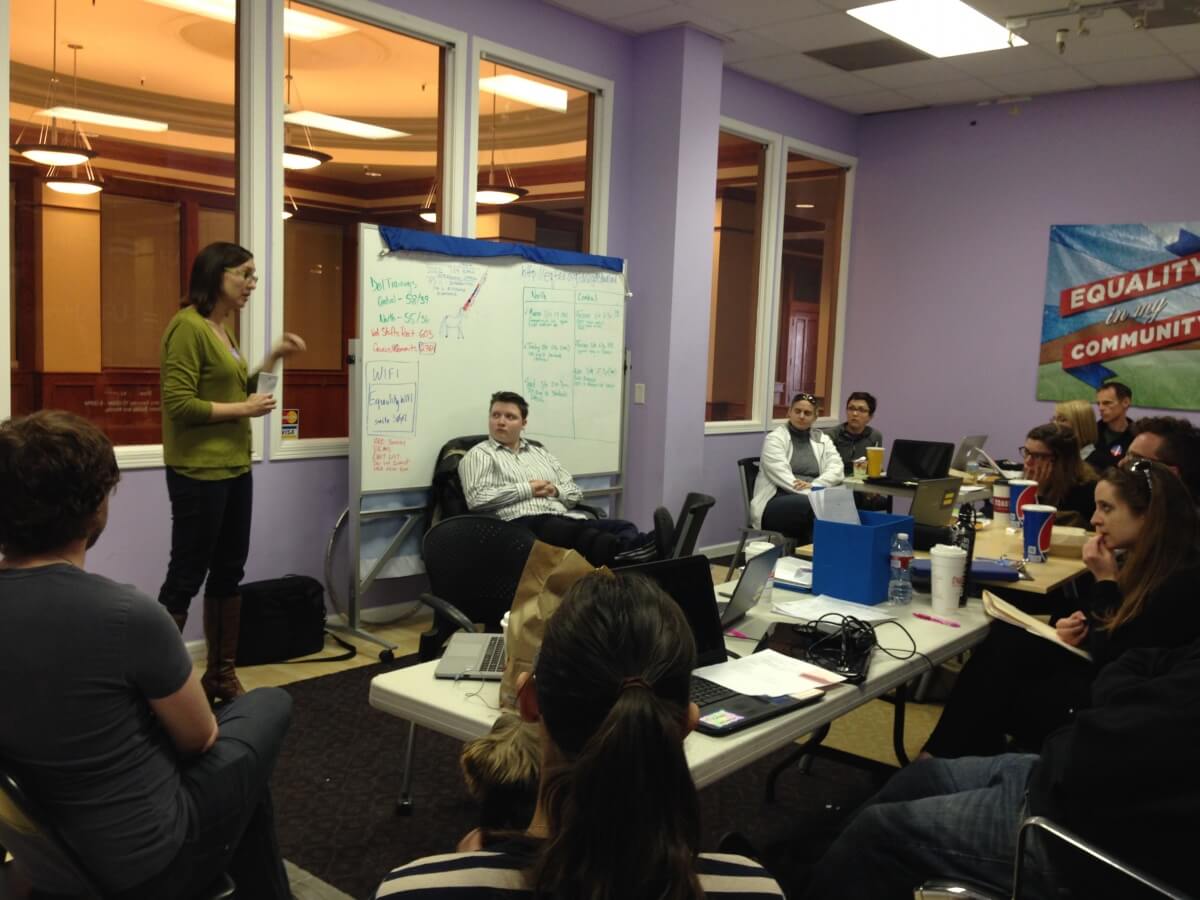 When the legislative session began in Utah this year, Equality Utah (EQUT) felt prepared to pass a nondiscrimination bill -- they had spent years building relationships on both sides of the aisle, had worked closely with the LDS church, and were planning to run a robust legislative campaign to show lawmakers that the public supports a law allowing gay and transgender Utahns to live free from discrimination in housing and employment.

Then, in December of last year, a federal judge ruled that Utah’s ban on marriage for same-sex couples was unconstitutional. Before a stay was issued, many Utah couples were married.

As joyous as this time was, EQUT Executive Director Brandie Balken feared that this new development would spell the end of the nondiscrimination campaign for this session. Unfortunately, she was right.

Not only did the prospects of their nondiscrimination bill dim, but also, some legislators also began to introduce extreme anti-LGBT bills in reaction to the marriage ruling. The legislature decided to put a moratorium on any LGBT bills, effectively killing EQUT’s bill as well as the anti-LGBT ones.

At this point, Brandie could have decided to shut down the organizing effort and start again next year. Instead, she pivoted, and devised a plan to identify and educate the neighborhood leaders who attend party conventions.

EQUT’s field team completely switched gears from driving calls and meetings to legislators to finding influential grassroots leaders to bring a message of nondiscrimination and equality directly to the ears of lawmakers where it matters most: their nominating conventions.

This may be the first time a state group has tried a strategy as difficult and unwieldy as this, especially in such a short time.

Last month, I visited Salt Lake City to work on the ground with EQUT, which just wrapped up the first phase of this campaign. Their team was working to identify and train supportive neighborhood leaders who would help educate legislators on LGBT issues at the upcoming Republican and Democratic state conventions.

I admit I was skeptical at first. But as I traveled throughout the state, I met many of their neighborhood leaders, and I began to see how smart and strategic the plan was. I met a Republican mother of eight kids who was excited to represent her suburban neighborhood at the nominating convention and to bring a message of equality for all to her legislators.

I met a Mormon man who felt that his participation in the process could help him represent the concerns of his neighbors and family, including his gay brother, to his representatives.

Ask for What You Need
When I first walked into the bustling campaign office, many familiar faces greeted me. Hunched over laptops, on the phone, or meeting in small groups, I found many organizers I knew from previous campaigns in Maine, Minnesota, New Jersey, Rhode Island, Oregon, and Indiana.  These young people know how to build a team, train volunteers, organize in district, and more.  Some had been in Utah for more than a month as staff of the campaign, but many were there as “vacation volunteers” -- there on their own time to contribute their skills to helping build power in Utah.

“How did all of these people make it to Utah?” I wondered. Then, I saw a large poster on the wall with “Help is coming!” scrawled across the top. Beneath that, the names of a dozen experienced campaigners were written, with the date of their arrival.

My name was there, too, and someone had penned a smiley face next to it. And then I realized -- they got these people to come the same way they got me to come. They asked.

Since the inception of this campaign, Brandie and her team have not been afraid to ask for what they need. No one leader has every skill or resource necessary to run every effort, and the ability to embrace this and to seek out expertise, funding, and counsel is truly a hallmark of successful leaders.

Having never mounted a full field effort, EQUT reached out to the Federation for advice on creating a fundable field plan. They then sought out the best talent, hiring Molly Griffard, who had recently lead the organizing effort of the New Jersey marriage campaign.

As the situation in Utah changed, delaying the possibility of passing a bill this session, EQUT reached out to supportive Republicans to help craft a new plan. Finally, for the final push week, the field team reached out to organizers across the country, asking them to come in and lend a hand as volunteers.

Homegrown Leaders
Although I was delighted to see so many old friends and colleagues from around the country working in the EQUT office, I was more excited to meet new people. This campaign prioritized building local leadership, like Preston Hilburn.

Preston came to the first phonebank of the campaign, became a volunteer leader, and then was hired on staff. Preston wrote to me after the campaign to tell me what working on the campaign meant to him:

“Growing up I always heard that one voice or one vote can make a difference, but it’s so easy to take that advice and simply do nothing with it. Through the efforts of Equality Utah and many other supportive organizations in my community, I have found my voice and know that I in fact can make a difference. I have grown tremendously on this campaign and know I have been given tools that I can and will use to improve the lives of others for the rest of my life.”

EQUT invested in developing volunteers as leaders, and now they have the knowledge and skills to continue the work that it will take to pass Utah’s nondiscrimination law.

Moving Forward
At the convention this past week, all of Equality Utah’s hard work paid off. They were able to use the gathering as an opportunity to have hundreds of positive conversations and to educate and identify new supportive delegates. Delegates working with EQUT already in support of LGBT equality were able to have conversations with legislators about  SB100, the state’s proposed anti-discrimination bill.

What can we learn from Equality Utah’s recent experience? One takeaway from this campaign is that leaders at Equality Utah took lemons and made lemonade, but it’s more than that. They were humble, creative, and ready to pivot at a moment’s notice. They were willing to work with both Republicans and Democrats to craft a winning strategy, and then to re-craft it. They didn’t get stuck in a rut of doing things the way they’ve always been done, and they certainly didn’t give up at the first sign of disappointment.

This campaign is just a small step in the Beehive State’s long journey to pass this law. So much work has led up to this moment, and much more is still to come. But today, because of the work of EQUT, LGBT Utahns are one step closer to living free from discrimination.